Estrogen Is Not Just A Female Hormone: 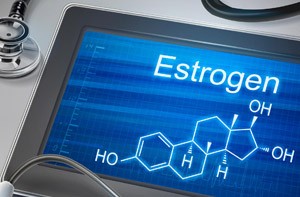 One of the critical issues affecting middle age men, particularly those who are
overweight, is elevated Estrogen levels. High Estrogen levels lead to many undesirable side effects including gynecomastia (commonly known as man-boobs), weight gain with increased abdominal fat, diabetes, erectile dysfunction, poor memory, and loss of body hair.

The obvious hormone imbalance culprit is testosterone, since men gradually make less of the male sex hormone as years go by. However, a surprising finding is emerging. Both men and women make Estrogen out of Testosterone. As levels of both hormones decline with age, the body changes. Estrogen in men turns out to play a much bigger role in men’s bodies than previously thought, and changing levels contribute to expanding waistlines, just as they do in women’s.

Until recently, Testosterone deficiency was considered nearly the sole reason that men undergo the familiar physical complaints of midlife change. While dwindling Testosterone levels are to blame for middle-aged men’s smaller muscles, falling levels of Estrogen regulate fat accumulation and bone loss called osteoporosis. Some of the symptoms routinely attributed to Testosterone deficiency are actually partially caused by an Estrogen imbalance. As for sexual desire and performance, both require Estrogen and Testosterone, and they increase steadily as those hormone levels rise.

Stopping the Conversion of Testosterone To Estrogen:

Fat cells convert Testosterone to Estrogen, especially increased abdominal fat through the biochemical pathway using aromatase. Liver diseases also can raise Estrogen levels. Research demonstrates higher Estrogen levels may result in prostate enlargement and possibly prostate cancers and even breast cancers. In fact, it has been reported more men die from breast cancer than testicular cancers. There also may be more strokes and heart attacks when male Estrogen levels are too high. Low Testosterone levels may be partially caused because Testosterone may be depleted because of its conversion to Estrogen.

The Harding Medical Institute’s weight loss program is a smart, scientific way to help you lose your weight while enhancing your health, increasing your energy and promoting optimal well-being  for years to come. This medically supervised program …Read More

Our comprehensive Elite Full Day Executive Health Evaluation provides you with an unprecedented and exclusive one day of tests and consultations to evaluate your total physical health. By using state-of-the-art technology, testing and comprehensive laboratory analysis …Read More