Skip to content
11 Unexpected Things That Are Making You Fat

11 Unexpected Things That Are Making You Fat

Add to your list below the endless series of things that make you fat, many of which have to do with architectural planning and design. TreeHugger.com compiled this excellent list, which contains numerous waist-expanding phenomena you probably hadn’t thought of …

1. Cul de Sacs: A study by Lawrence Frank of the University of British Columbia found that residents in neighborhoods with grids and interconnected streets traveled 26% fewer miles by car than those who lived in neighborhoods of cul-de-sacs.

2. Cars: The less people walk, bike or use public transit, the more likely they are to be obese. If you don’t have a car, it’s also more difficult to load your fridge with tons of food.

3. Where You Live: Certain states, such as Mississippi, Louisiana, Alabama, Kentucky and Tennessee have much higher rates of obesity than others, like Colorado, Utah and Montana. Way of life, including physical activity and food trends, may partly explain why.

4. The Recession: When money is tight, people often turn to cheaper fast food options instead of wholesome foods.

5. The Suburbs: People in the suburbs drive everywhere and far more than people in urban areas.

6. Architecture: Public spaces often encourage inactivity and poor eating habits, and make it easier and more inviting to take the elevator instead of the stairs.

7. Cheap Gas: Obesity rates climb when gas prices are stable or declining, according to a study by Charles Courtemanche of Washington University in St. Louis.

8. Easy Access to Fast Food Restaurants: There is a direct correlation between a city’s obesity rate and the number of fast food restaurants per capita, according to a Canadian study.

9. The Government: Government policy and farm subsidies make fast food cheaper than healthy food. A study by Drewnowski of the University of Washington revealed that you can buy 1200 calories of cookies or chips, but only 250 calories of carrots, with $1.

10. Endocrine-Disrupting Chemicals: Endocrine disrupters in your food and environment can make you gain weight.

11. McMansions: As average square footage of U.S. houses climbed, so did rates of obesity, according to Dean Johnson*. 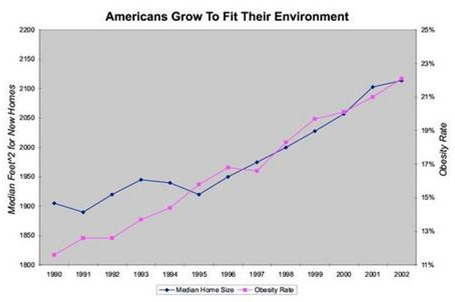